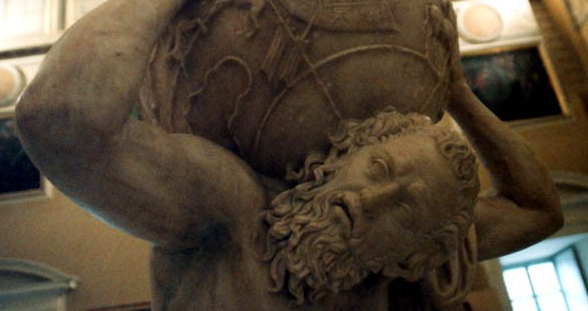 “If you saw Atlas, the giant who holds the world on his shoulders, if you saw that he stood, blood running down his chest, his knees buckling, his arms trembling but still trying to hold the world aloft with the last of his strength, and the greater his effort the heavier the world bore down upon his shoulders – What would you tell him?”

I…don’t know. What…could he do? What would you tell him?”

Ayn Rands bleak dystopian novel Atlas Shrugged has been a favourite of libertarians, neo-conservatives and right-wing politicians for over half a century.

Rand presents a heroic story of industrialists who, sick of being pushed around by a pesky know-nothing government, decide to “stop the motor of the world” by withdrawing their labour, skills and capital and leaving the rest of us to fend for ourselves with nothing but a dull and corrupt government to look after us.

It’s easy to understand the appeal.  Anyone who has ever run a business can identify with the frustration caused by the government and its inefficiencies.  It is also a salutary reminder to anyone who dreams of a utopian future than often progress is reliant on risk-takers, visionaries and those who are willing to put in extraordinary effort with the expectation of extraordinary reward.

There is also the individualist message in the central metaphor of Atlas.  No one is truly responsible for anyone else, and if we all just set about looking after number one efficiently we would have a much happier world.  This message has been taken to heart by the entire financial sector and is at the heart of the austerity politics currently defining western democracies.

However, the option to just shrug isn’t always available.  Some people have jobs whose very nature means they are responsible for the lives of other people.

A psychologist will not fail to make a phone call to admit an acutely suicidal teen because their shift is over.

It is here that our policy-makers enter key decision making moments with a cognitive bias that leads to poor outcomes for the helping professions.

In 2008, with the banking sector on the brink of collapse, I don’t recall any serious policy discussion saying “we don’t owe them anything, they chose to take the risk, they chose not to accurately quantify that risk, and bankruptcy is the result of those choices”. Instead, we simply asked how big a cheque we needed to write for them.

In our 2019/2020 bushfire season, there were firefighters who worked for months on end saving homes and lives.  They were volunteers, and none of them earned a cent from their day jobs during this entire period. When asked about it, our Prime Minister said: “they want to be there”.

In other words, those brave men and women were displaying what no economist can quantify, community spirit.  According to Ayn Rand, and all economic logic, they should have put their hoses, let the country burn and gone back to work.  However, those people understood what the economists dont, we are all in this together. It is in everyone best interest to work together as a community, rather than all look after ourselves

Of course, we are all happy to accept that generosity.  However, the true measure of our hypocrisy is how willing we are to turn on those who have done the right thing.

I cannot imagine how it feels to be an ABC journalist (Australia’s national broadcaster), having spent all of summer doing unpaid overtime making sure that bushfire information reached isolated communities huddled in church halls around AM radios, to come to work in February and read about the latest budget cuts for the broadcaster.

I cannot imagine how it feels to be a GP who has just endured 5 years of Medicare rebate freezes, to be one again told you are the front line of a health crisis, most of your work will go unpaid, and the reward of which will probably be you catching the disease yourself and ending up unpaid for several weeks while you self-isolate.

People who have essential jobs take them seriously and when a crisis comes don’t shrug, they step up and put their shoulder to the wheel.  They don’t do these jobs because they expect thanks or massive paycheques, but they are getting sick of being hamstrung while they try.

This has eroded the social contract.  The willingness of good people to buckle down and once again fix problems crisis has worn thin.  What will happen when we hit the next crisis, and good people simply shrug?